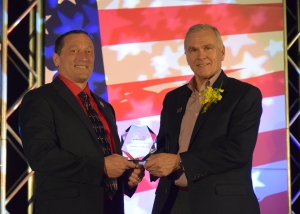 With his induction into the 50-Year Club, Groff joins a select group of bankers who have given 50 or more years of service to Pennsylvania’s banking industry and are regular members of PA Bankers.

Ephrata National Bank is an independent community bank with over $1 billion in assets and 12 full-service locations throughout Lancaster, Lebanon and Berks Counties.

Groff joined the bank in 1967, as a part-time teller, and then moved into a full-time role. He has spent all 50-years at Ephrata National Bank, working in various capacities as a Computer Operator, Co-Manager of Data Processing, Programmer/Systems Analyst, Loan Department Manager, Assistant Cashier, Loan Interviewer, Director of Marketing, and as a Chief Operating Officer before becoming Chairman, President & CEO.

Passionate about serving the communities in which he works and lives, Groff is a member of the Board of Directors for several organizations in addition to his role as Group 5 representative to the Pennsylvania Bankers Association’s board, including: WellSpan Ephrata Community Hospital, WellSpan Philhaven Behavioral Health, the Church Investment Loan Fund of the Mennonite Church and the Guy K. Bard Educational Scholarship Fund. In addition he is a member of the WellSpan Health System’s Audit and Planning Committees.

Groff has served as an instructor for the Pennsylvania Chapter of the American Institute of Banking and recently completed two consecutive terms as a member of the Board of Directors of the Philadelphia Federal Reserve Bank. He is a graduate of the American Institute of Banking, the New Jersey Banker’s Association Data Processing School and the IBM Data Processing School.